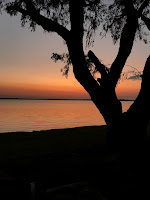 We wake a 7:30. A chorus if birds are singing outside the tent. After a while, we get going. Lola hangs around me closely while I’m taking the tent down and packing. It’s a quiet morning, other’s not up, or at least outside yet. By 8:30, we’re almost ready to leave, and I take my eye off Lola. I turn around and she is gone, down by the lake I assume. I walk down over the rise and see her over to the left by the pier. She is rolling in ecstasy on her back again. I know this will not be pleasant. I go over, and yes, this time she is rolling around on a large, dead fish—looks like a pike that has been in the sun for several days. Lola gets a vigorous bath in the lake. She doesn’t like that.

We are off by nine. It was a pleasant campsite. I have planned my time and expect to arrive in Livonia, Louisiana, where I will be staying with my friends, Renee and Paul, in their resurrected Cajun plantation home that had been in Paul’s family for centuries. It’s one of my favorite houses.
At about ten, we stop for a breakfast, after which we make good time through south Texas. The landscape gradually changes from mesquite to taller trees and mildly rolling hills, the houses still far between. I know my trip is essentially over, although Baton Rouge is really the endpoint, as it was the beginning.
Driving in the United States is, compared to driving through Mexico and Central America, emotionally flat because I know what to expect. Consequently, for the first time since I began this journey back, I plug in my iphone and start listening to the theorized final chapters to On the Road, theorized because a dog had eaten the end of the scroll version. I don’t like it as well as the version that ended with what we know were Kerouac’s actually words. I think the theorized version ends flat.
Then I start listening to Helen Macdonald’s memoir, H is for Hawk. Macdonald is a lovely writer—perhaps too lovely, but I love here themes, all of which speak to my journey: death of a loved one, stuttering attempts to recover, failed subsequent relationships, loneliness, interspecies communication (in Macdonald’s case, people and birds; in mine, people and dogs). In one section, while describing a U-2 pilot’s experience while flying alone for 1-12 hours on the outer edges of the earth’s atmosphere, she quotes, I think, Marianne Moore, who said something like, the best cure for loneliness is solitude. That is it, exactly. Driving alone through Central American and Mexico does not make me a U-2 pilot, and I do not have a book as my co-pilot (as did this U-2 pilot, who had a habit of reading Once and a Future King as he flew—I have Lola), but driving alone through strange country for three weeks provides plenty of solitude, enough to make one an existentialist.
I hit Houston by 1:30 and follow the GPS directions (59 to I-10) straight through downtown instead of taking either of the two possible beltways. The GPS was right (in contrast to its usual information Mexico and CA). But about a little east of Beaumont, I hit stopped traffic. It soon becomes apparent that no one is moving. I am worried, because I know Renee and Paul are expecting me for dinner somewhere around six, but I text my situation and Renee, as always, is gracious, and tells me not to worry.
After about a half-hour of getting nowhere, I see a smart driver drive off the road and across the dirt/grass to the frontage road on the right. I squeeze over in the right lane, and do the same, see the traffic piled up down the frontage road but the entrance to I-10 going West (back) is clear, and so I do a quick map check, take I-10 West (back), take the first road north that I can, another slanting northeast, and after a while, one south back to I-10 to circle around whatever accident is on I-10. I think driving through Mexico and CA, particularly on the way down without maps, has made me a resourceful driver.
I lose about an hour and a half. I’m not going to make it to Renee and Paul’s until 7:30-7:45. I settle into driving this last stretch, listening to H Is for Hawk.
It’s getting dark by the time I pass Lafayette. A little later, I reach the Atchafalaya spillway crossing the incredible Atchafalaya swamp. It goes for about twenty miles. I am coming back to Baton Rouge, and I’m a little bit sad, because this is where a wonderful part of my life with Sarah was. Traveling the spillway, I go through this period of my life, almost as if I’m in a time warp.
It does not escape me that I am nearing the end of my road trip by returning to Baton Rouge on September 11, commemorating the day when thousands lost people they had loved, leaving the survivors to cope with that horrible loss and struggle to repair their broken lives. Or that Sarah died on August 11, 2011. If I were a numerologist, I would try to read this language of loss, noting perhaps that we survivors are odd, not even.
But these things happen. It happened to Helen Macdonald and so many others I have come to know who have lost at least half of their lives. We are left to find our new ways on a strange road. I think my road trip through Mexico and Central America and back has been a metaphor for my journey without Sarah, going down without maps or language and coming back with both. My Spanish is still quite terrible. Going down, I met with anxiety any situation in which I had to speak. Coming back, I looked for situations in which others would tolerate my tortured language.

I’m a little proud that I have made it.