by ipeckhamPosted onSeptember 10, 2017
The day turned into an adventure—two adventures, to be exact, and the second one isn’t over. 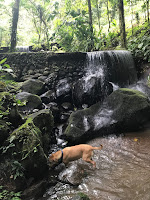