I’m not going to have much time to write. I forgot to plug my computer into the car—but I can write on my ipad. I hope there’s juice for that. And I have a lot to write about today. 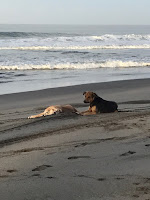 Goto Day 19: Seeing How Others Move