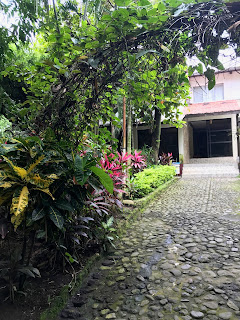 I imagine the day will bring nothing to write about, but it does. When you put yourself in a vulnerable position, something’s bound to happen.

I have a leisurely breakfast, savoring my last day at Hotel Carolinas. I enjoy chatting with the manager and desk clerk, both of whom remember me from my trip down. I am packed and ready to leave by nine.
I think because of the mileage that I would reach the border by 11, but the desk clerk tells me three hours, mas o menos. I can’t interpret her explanation for the longer time. I also miss a warning shot across my bow when the desk clerk tells me she can’t take dollars—other than a 50 or a100 dollar bill. She says that’s all they will accept at the bank. We work out an exchange with the quetzalis I have, plus my credit card.
The bank is right up the street. Remembering my difficulties coming down, I think about stopping in to exchange dollars, but I am a little worried about reaching the town where I have planned camping, so I drive on. It doesn’t take me long to reinterpret the desk clerk’s time prediction. The potholes are frequent and halfway to China. They are even worse than the road from Pedasi to Venao. I hit one that was so deep that for a moment I was stuck.
The ride is mostly dodging potholes. In spots, the traffic is backed up—a sure sign of serious potholes ahead. I think again about the logic of travel. My mind is fully on the road. I have no room for anything else. There are times when I let my mind slip and I slam throgh a pothole dangerously. My Prius survives. 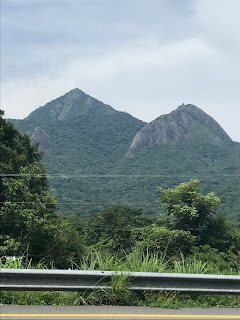 Goto Day 17: Although My Head Is Bleeding