This will be brief. I don’t have much to record because I am spending the day at the Hotel Carolinas, a calming place and clearly well-known to the local population. This is Sunday, and the place is filled by Guatemalans with a gringo here and there. 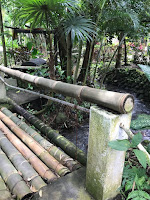 There is the sound of water all around. There are several swimming pools, and it seems as if all the walkways and casitas are surrounded by water, making one think about Sachi’s documentary, the healing power of water—in which I might be making an appearance (and there is a very interesting story there about Sachi and Cocoloche, one I don’t want to forget). I love the sound of moving water: that’s probably why I decided to stay here an extra day.
The connection between healing and water are obvious, so I won’t reflect on them. I also love the visual healing power of mountains. Combine that with mountain streams and you have peace.
I won’t go too far in this vein. But I will say that this trip has had healing power. I have loved the way people have interacted with me. You go into strange places, and people are simply interested in saying hello and finding out about each other. Our stories intersect— I think when we talk to each other, we are taking pleasure in discovering how we are like each other, a way of confirming that we are not on lonely planets. When you think about it, you might suspect that the capitalist narrative tries to isolate us; the socialist narrative tries to bring us together. I know the political stories are more complicated than that (like imagine as humanistic capitalist [Warren Buffett] and a privateering socialist [Nicolas Maduro]) and you see how ideologies are contradicted and complicated by actualities; still, there is something to the overarching narratives of working for the self versus working for the community.
You can see that I have had too much time today to think. I perhaps do better when I think while driving. I will try to get at the healing: I don’t like being alone. That’s why I have Lola—and perhaps why Lola has me. I am not the meditative sort. I can get into some sort of tortuous position and go OM for a while, but that’s not me. I’m more at home mountain biking—best when I’m doing it with Phil. But still, this trip has been about being alone. It’s also been about the unknown—not knowing where you are going but meeting the unknown as an adventure rather than something to fear. You might say that by going to where I’ve never been, I’m learning how to write.
I end the day by trying to find a bottle of wine. Finding a bottle of wine can be an adventure. I went up the road about five kilometers and turned left to wander around a little side town called San Ramona. The streets are cobblestone and about five donkeys wide. It’s Sunday night, but lots of people are out on the street. I drive for a few blocks, looking for anything mentioning mercado or cerveza. I stop and ask people on the street, hay una tienda a donde puedo comprar un botella de vino? One points me to one store, and the person there points me to another store, and the person there to another store. Not likely to find wine, but I don’t really care. I just like going into this dark little town and asking questions. 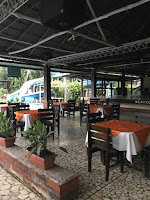 I get to a little hole in the wall, dark, four men drinking cerveza at a table. I ask the bartender about wine, but no, not here. Ninguno beber vino. But he has a bottle of the best rum in Guatemala. We start talking about how much it is in quetzales, because he doesn’t know about dollars. A man speaking half-English comes up to help the negotiation, convinces the bartender that dollars are good if we can calculate a fair exchange rate. I know it’s seven, so we go from there. We arrive at $35.00 for a very good bottle of rum, and we’re all happy. I go home and have a glass or rum over ice (forgive me, purists); it is very good. I can’t say how much I enjoy this kind of event. It seems small,

but it’s not. It is full of good will and language. I love it.

I would like to stay here for another day, but I had better move on.