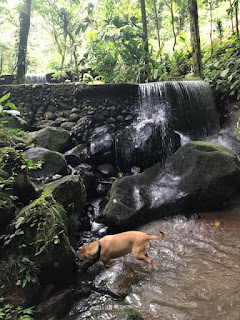 I want to capture the rest of my day, Sunday, at Hotel La Rana, near Arenal. I spent the rest of the afternoon walking with Lola and working on a book (and trying to get the internet to work, to very little avail). Lola and I walked down to the lower edge of the property, which is quite a hike. We were hearing the rush of water and spotted a small hole in the jungle, where water was crashing down over rocks and artificial dams someone had built decades ago when this place was some very wealthy person’s getaway. I was reminded of one of my favorite literary passages—in Lorna Doone. I loved that book, I read it several times when I was in grade school, our one-room school house in Brush Creek where we all had a lot of time for reading. I can’t remember the boy’s name, but I remember when he discovered a hidden grotto and in one of his visits, he came upon Lorna—and that was the beginning of their story and love in the middle of the warfare between their two families.
Lola jumped in the water and splashed and splashed and splashed. She ran upstream and downstream for about an hour, and I just watched, gaining pleasure from her pleasure. I have pictures and videos, which I will post when I get a good connection.
After an hour, I decided I wanted to write for the rest of the afternoon and called her to come. She was having too much fun to hear me, so I left her and began walking back up the trail and hill to our room. When I was half-way up the hill, she came bounding out of the jungle and ran in circles around me.
I wrote while she relaxed for the rest of the afternoon. As the Hispanics say, this place es muy tranquillo. I didn’t want to leave. It was almost inner peace.
At about five, I heard a commotion—arrivals. It was Philppe, Maria, Sean (her partner), and Philippe’s family. There were here for afternoon drinks on the patio, and I joined them. It was a very pleasant late afternoon. After they left, I had a lovely dinner on the deck, and then went down, wrote some more, and went to bed.
The next morning was difficult. I didn’t want to leave, but I knew I should. I need to get back and take care of some things in the states, no matter how temping it might be to find a place like Arenal and just stay there.
I have been reading response to my travelblog. These are important to me. I tried to explain my response to having readers on facebook, but I don’t think I got it all down. One of my friends said she is traveling on my wave. I know that others are traveling with me, my words inviting their words. It’s impossible to explain how strange this trip has been, but it’s just something I had to do, and the words from my friends give me the courage to move into the unknown,
I didn’t want to leave La Rena. I was comfortable there. I knew what each minute would bring. But I had to go. I had a lovely breakfast, went for a walk with Lola, said good-bye, and moved on.
The first part of the trip was beautiful, winding, country roads, circling the lake. I got lost a couple of times because I wasn’t paying attention, but then got back on the main road. I by far prefer the lost highways to the main road, but I could see I could make the border by one and decided to cross.
I’m getting good at the borders. There are always difficulties, but I hire border rats, and they get me though. I could probably do it myself, but I think I need a couple of more runs. I hit the border at 12:30, and one of the rats took me through in an hour the Costa Rican side. I think he constructed difficulties, but I gave him $15 and went on to the Nicaraguan side, where my amigo from the way down (the one who wanted to charge me 60.00, down to 20. Bump fists) was waiting for me.
He did good work. The backs and forths are idiotic. They took two more hours. Lola creates mucho difficultados. But by 3:30, we were through. My border rat said they were going to shake me down, making me unload everything for a final check but that he had paid the cops 10 to get the pass. I knew that was shit, but I gave him another ten ($40) and I was out of there. He did good work.
I drove for about an hour and found a lower-class, dog-friendly hotel. It was 4:00 pm, and I didn’t want to take chances. I won’t post pictures of this place, because it’s really ugly, but I have a place to sleep with Lola and that’s something.
Thanks to all of you who are hanging with me on this trip. Knowing that you are hearing me gives me support. The trip is more than material. At times I wonder whether I will make it back. I also have a bad cold—developed when I was putting my tent up at Alexander and Silvia’s in the rain and didn’t change out of my wet clothes. They told me I would get sick. I did. And I don’t like it.

Tomorrow, I’ll cross Nicaragua. I haven’t decided whether I’ll go north to skip El Salvador. Some say the high mountains and the north are more dangerous, but I think borders are the most dangerous part of traveling. If I weren’t sick, I would be feeling pretty good. I know I can handle this. And that’s something: being able to travel solo through Mexico and Central America. But really, anyone could do it. I think that’s what I’m proving.

Goto Day 10: And I Thought I Wouldn’t Have Anything To Write