by ipeckhamPosted onAugust 27, 2017
I am up at seven, taking down my tent, and repacking my car. While I am in the middle of repacking, the tent down, Alexander comes out with coffee in hand and asks whether I would like some.
I’m going to give you just enough details so that you will understand why I am still in Costa Rica although I had planned on being in Nicaragua today.
A was very friendly and wanted to know about my life. Everyone is curious about a crazy old gringo (for Mary) driving though Central America with two bikes on his car. The policia rarely ask for my license—they get distracted by the bikes and usually want to know how much they cost. 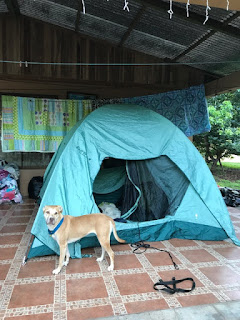 Soon (while I’m trying to pack) the conversation swerves and A wants to give me traveling advice. We work on the map and he insists that I should take some time out and drive to Fortuna to see Volcan (volcano) Arenal, the highest point in Costa Rica. Fortuna is considerably out of my way, but A says the drive is the most beautiful drive in Costa Rica. Although I had wanted to make Nicaragua today, I consider taking the Fortuna trip. After all, it really won’t make much of a difference if I arrive in Haddonfield a week early or a week late. I’m starting to get used to the fact that I don’t have to be anywhere anytime. This is weird. Deep inside, something nags at me—that I should have a destination, a purpose, a schedule, a way of saying, there, I got that done today. This is crazy; deep conditioning.