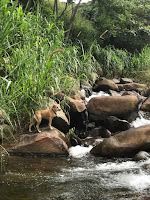 I think this will be a short entry. Today was not a good day, and I may have trouble finding any humor in it. Even with my low standards, there were no silver linings. But now that I think of it, there were two humorous moments.
Lovely breakfast, breathtaking landscape at Hotel Palo Alto in Boguete. I took care of email; then a wonderful young man from Pedasi gave me about a half-hour of dog-training hints. He was clearly an expert. I need someone like him back in the states. Lola and I went for a walk, and Lola got to play in the fast-moving stream next to the hotel.
Doria called the Aduana, and they said everything was taken care of—and then they complained about our having called our embassies. And that we should bring from 20 to 500. They wouldn’t tell us what our fine would be.
Perceptive readers already know the rest of the story—particularly if they have been to Panama. We took a taxi down to David. I sat outside with Lola while Doria and Jeff went in first to settle. They were in there for a half-hour (not a good sign). Then Daria comes out and tells me they want all of us in there. So I tie Lola up. She barks good-bye when I go inside. And keeps barking. She does not like to have me out of her sight in strange territory.
Our group conference began reasonably enough—we just had to read the three pages of their judgment with some mention of a fine. Then we asked how much the fine would be. The maxiumum–$500.00 for each of us. The conversation went quickly downhill, we saying we wouldn’t pay, they saying you can write for a different judgment and a decision might be made by tomorrow (yeah—we’ve been down that road). Then a huge rainstorm hit and I had to go rescue Lola from the fence where I had tried her. Sad, little, soaked dog and her soaked blanket.
There is no reason to narrate the next two hours of the conversations going nowhere—they knowing they are being assholes, and we knowing we shouldn’t have come down without knowing the fine and having a chance to confer with our embassies, and me going out to comfort Lola who is showing classic signs of stress, heavy panting, where I had had to tie her to a railing out of the rain.
I had noticed in my times going in and going out this tall, good-looking fellow, with a rip-van-wrinkle beard hanging around in the outer office. He looked as if he were there for similar reasons. I would roll my eyes whenever I walked, increasingly furious, past him.
I won’t keep you in suspense. Sometime later, Jeff came out and said he had been talking to the tall Rip Van Winkle about what goes on in that office. Rip told Jeff that if we could get out of there for $500, we should take it and run. He’s been trying to get his sailboat, truck, and trailer back for four months and has so far spent $5000 on the process. The upshot: these guys are serious pirates.
So Jeff says he’s ready to pay and get out of there. After some back and forth and fallen pride (do all men have these dreams when someone has you by the cajones and thankfully you wake up right before serious damage is done?).
So Ok—we go through the process (with a lot of waiting for this and that, Lola outside barking—me, hoping she bites someone in the cajones).  Finally, it seems like Jeff and Doria will get there car. Then I learn I have to pay another 12.50 for someone to escort me back to the border, and I have to be out of the country by the end of the day. Well, my computer and some of my luggage is in Boquete, 45 minutes away. So I say I can’t go—no one said anything about this in our negotiation. The end: If I came back at 8 in the morning, I could get the car and someone would escort me to the border.
It is still pouring like the rain lifting Noah’s ark. After some shouting, we agree to this. My by now
very good friends, Jeff and Doria, say we can all go back in their car (which they still don’t have) and if after they get their luggage in their mini-car complete with camping material, we can come back in the morning (I am desperate to have Doria’s help in the morning, because I know these assholes will throw me another curve in the morning); otherwise, I’ll get a taxi and they’ll follow me in (these are serious Christians).
So in the pouring rain, we’re waiting for the you-know-whats to move the car blocking J&D’s car. There is this hilarious scene when one group of the you-know-whats telling the other group that they have the keys to the blocking car and the other group saying, no, you have the keys—and this back and forth going on for ten minutes in the pouring rain. After a while, it seemed that fifteen people were in this conversation, everybody accusing everybody else, mixed in with Rip Van Winkle having paid his $5000 fine and his truck’s battery is dead and no one in this hugely incompetent group (except they are extremely competent land-pirates) can find jumper cables so that Rip can start his truck and haul his ass out of there.
After about twenty minutes of shouting, it seems someone finds the keys and moves the blocking car. Lola feeling as sad as a dog can me, and me wishing I were Pancho Villa. Jeff pulls the car around; makes room for Lola and me in the back, and Doria gets in the front. We drive off in the pouring, pouring rain.

About a half block away, we see Rip walking in the rain. We pull over, Lola and I do a squeeze, and Rip gets in. We find out where he’s going and head off, not too far out of our way. In the car, we talk in vicious terms about our experiences with the Panamanian Pirates. Rip likes to write. I like him. I ask him his name. He has a great sense of humor. He says you won’t believe, but I’m Noah and I’m trying to get my boat back.
We drop him off. We drive back to Boquete, the best thing about Panama. We try to dry off a little. The rain has stopped. Doria, Jeff, Lola, and I walk down to George’s (another great guy) for dinner. We order our dinners and drinks (J&D for something non-alcoholic, me for something that will knock me senseless). We start a game of Ofta. Our drinks come. A little later, our salads come. Jeff, Doria, and I bow our heads and Jeff prays a bit, thanking God for several things, including letting us get back to the hotel.
The prayer is finished. I say, I notice you didn’t say anything about our five hundred dollar fines.

One Reply to “Oops Day 6–who would have thought?: Noah’s Arc”