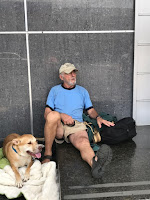 At breakfast, Jeff, Doria, and I discussed the possibilities and what motivations may have lain behind them. Jeff and Doria are serious Christians, and I’m a serious atheist, so at times our discussion veered toward whether God had his or her hand in all this, but for the most part, we have acknowledged our theological differences and respected each other’s way of interpreting the material and spiritual universes. The question was whether we were going to be able to get out of Panama today. We had been assured on Monday that the Aduanas (customs) would get final decisions on Tuesday, but that we should call before we came in.
So Doria said after breakfast she would call (they don’t speak English in customs). I went with Lola to my room after breakfast and asked J&D to just let me know when we should be going in to get our cars.
This was at 9:30. I’m busy playing with my computer and then it’s 10:30. No knock on the door. I read some more crazy news stories, download some programs to my new laptop. 11:00. I walk with Lola past J&D’s room, intending to knock, and hear a spirited phone conversation, so I go back to my room, play with my computer for another half-hour but can’t contain myself and go back to J&D’s room. The door is slotted open, so I knock and am invited in to my new friends’ room.
Getting to the quick: Doria had called the Aduana: they told her the chief honcho was still out of the country for some family reunion and might not be back until Thursday—if then. They needed his signature to release our cars. I think that’s when Doria got into a spirited conversation verging on warfare (they have had their car impounded since Friday).
She called her father in Costa Rica, who suggested that they call the Costa Rican embassy in David and the American embassy in Panama City, which she did. The people at the CR embassy said we should come in to David and explain our situation and also call the American Embassy in Panama City, which Jeff did—and was told to call back after 3:00, when the right people to handle the complaint would be there.
So we had our three-way meeting and decided that if we might have to be in Panama until Thursday, we should go to this lovely town in the mountains, where J&D had been: Bouquette. Jeff called some hotels and found one that would accept a dog.
We packed, said good-bye to our lovely hostess, Jesse, and Eric drove us into the Costa Rican embassy. Good-bye to Eric, a wonderful young man. My parting words: I hope to see you again, but on the other hand, I hope I don’t.
They don’t allow dogs into the embassy, so Lola and I camp out on the embassy steps while J&D go inside to confer with an embassy representative. I am fully aware of my public profile: an old gringo with a dog and two backpacks camping out in front of an embassy. I drew lots of sidelooks and full frontals. If I had had my guitar, I would have put my empty case out in front of me and sung songs about failed relationships and empty dreams.
After about an hour (I will have to say that I enjoyed playing this backpacking vagabond part), J&D came out. Good conversation. The embassy representative had called the out-of-country official to complain about a protocol resulting in our cars being impounded for several days while he was at a family reunion. Wheels were turning. The embassy representative said to keep pushing on the Aduana—that there was no excuse for this behavior.
So Lola, J&D, and I crammed into a taxi for a ride to Boquete in the mountains. We were feeling positive (from J&D’s perspective, that God had switched to our side after testing us with the not until Thursday possibility—if then.) 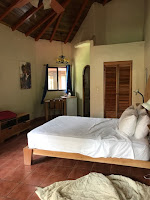 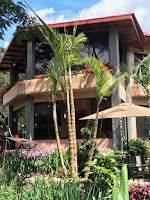 Sometimes I feel as if I’m just along for the ride to see what will happen next. I know that realistically, it doesn’t matter whether I leave Panama on Wednesday, Thursday, or next week. And sometimes I think that things happen to me so that I can write about them. As J&D might say, that’s God’s plan. So thank you, God, for imprisoning me in Panama, for putting J&D in my way, and for guiding us to Boquete, where I would never have gone if I hadn’t been stopped at the border and had my Prius (with guitars and bicycles and luggage and camping equipment) impounded for several days. 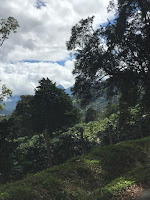 Boquete is one of the most beautiful places on earth. And our rooms are lovely. Jeff is trying to getme to believe in God, and I’m trying to convince him that Jesus was just a cool, sixties type of revolutionary, and we are having good conversations in the mountains. I’m inclined to ask Justin, the owner, if he needs any help in running this place (Justin, like me, is a dog freak, and Lola is running loose).
That’s more or less the end of the day. I called the American embassy, and they are onto this. The woman said this has happened before. She’ll call and complain to the people at customs. There really is not excuse for this.

I am now in one of the most beautiful spots on earth, drinking a cosmopolitan, Lola lying beside me, and getting ready to walk down a country road to George’s for dinner. I really don’t know what to make of all this. I do know it has something to do with traveling and putting yourself out there where you don’t know what will happen; it’s always a story. Always a story.

Goto Ooops! Day 6 Who Would Have Thought?