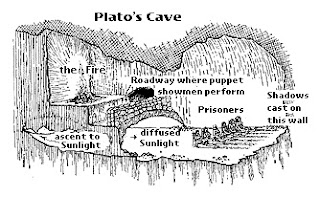 An upper level administrator, whom I admire, took some exception to my last post. I really appreciated his comment–basically, reminding me that upper administrators do care about student learning but they see the educational project from different angles than when they were teachers. They carry their memories of their teaching careers with them, but in their new positions, they have to respond to a different and expanding constituency.

This post is an apology of sorts for my last post. In my last post, I left far too much room for multiple interpretations of my reference to Plato’s Cave, particularly when I referred to the fools in the shadows. As with most writing here, I let that noun phrase roll off my fingers. Actually, the phrase doesn’t make sense within Plato’s classification of people. I was really thinking about the prisoners chained to the rocks (in the Republic, if I remember correctly, he includes in this category women and slaves), but I liked the phrase, fools in the shadows and there it went.

Now that I have apologized. I want to defend my choice–and contradict it. I still think that the further removed you are from the classroom, the less you know about students and effective teaching strategies. As you move into higher administration, the more abstract students (and teachers) become–in some sense, like shadows. But that’s not the same as imagining the shadows as fools.

My more focused aim in that post was the declining-literacy trope that circulates in the public imagination–and the consequent counterproductive “accountability” assessment projects (the most recent being Every Student Succeeds Act).

I recently had a long conversation with a dean in another university.  It was one of the most interesting conversations I have had in some time. She certainly didn’t imagine students as deficient or fools in the shadows. Quite the opposite. She understood that the “underprepared” label applied to students is essentially a class-based concept, that there is no such thing as an underprepared student (this is essentially the point of translingual pedagogy).

On the other hand, I know a teacher who thinks that students are lazy and that most of them can’t write their way out of a paper bag (that’s close to a direct quote), that they need to be forced to write academic essays whether they like it or not.

My point is that my claim about the relationship between locus and perception in my previous post is a hasty generalization, to put it mildly. I am bothered by teachers like the one to whom I just referred. We have too many of them in the classroom. I wonder about a system that not only tolerates this kind of vision but seems to perpetuate it. This gives me shivers this morning.