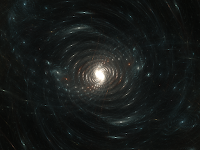 It was timelessly swirling, movement with no time, almost as if it were a bubble but not quite, not quite an it. There was some kind of conversation or something like words, but not quite—the gist of which was that when you go there, that’s it. No changing its mind. It becomes clearly an it, not flowing into and out of the timeless flow of space.
Almost while listening to this, it slipped out of the flow and into something like a whirlpool and through a black hole.
—
He was playing baseball. The kids were always playing baseball down at the park in the summer. He loved playing baseball, running across the grass, the ball arcing through the air, his body, his arm, his gloved hand knowing how to adjust his speed to the arc of the ball’s speed and when to lift his gloved hand and jump to make the catch; and his body loving the feeling of being at bat, the wonderful feel of the bat, balanced, the ball coming, curving toward the plate and he swinging the bat for a solid hit just as the ball came across, the feel of the hit in his hands, the crack of the ball and bat and the ball taking off and he completing the swing to throw the bat and run, the cheers and everyone shouting. He loved playing baseball, the warm sun, the dirt, the grass, the blue sky.
His mother was picking him up later at the park. There was something important for him to do.
He was in a colorless room. His friend was lying motionless in the bed. He loved his friend. He loved his friend. Don’t leave, he thought. But the moment came. He was by the bedside, and his friend was suddenly no longer there. He thought he would never again play baseball.
—–
I woke up. This was how in my dream world–a world as real as this one in which I lay staring into the night–I interpreted losing Sarah. I felt next to me for Miles, the pit bull mix I had rescued about six months ago. He had been on the street for about ten months when they found him and then another four years in a no-kill shelter before I brought him home.

There had been some problem with biting, but six months of trust and affection had taken care of that. I petted his head beside me. I love you, Miles, I said.