I had a conversation yesterday with a colleague and good friend (a lot of these posts, I realize, are the consequence of conversations in which I wasn’t able to explain myself and then woke up at 2:30 the next morning and thought for two or three hours about what I really meant). 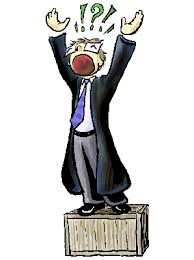 My friend and I were in a group discussing the use of portfolios. Somewhere in the conversation I slipped into a rant. Well, first, I was explaining my use of portfolios as a way of minimizing the role of grades in my writing classes. I have the students submit portfolios at mid-quarter and for a final. Portfolios are  easy to  grade to when you basically give mostly As and Bs in your class. As readers of this blog probably know, I start from the assumption that everyone in the class has an A. All they have to do to maintain that grade is never miss class and do all the work, let’s say, honestly.

When I frame the rhetorical situation for my students, I tell them that they have to give me portfolios that I could show to outside readers, like deans or chairs, who might challenge my grade distribution (people who imagine the bell curve as real–see bell curve).  Here is an example of my instructions to students:  final portfolio instructions-Engl 103

This simple explanation led to a kind of rant. I noted that people who use the portfolio system and unhook themselves from their addiction to grades (not a good rhetorical move on my part–but I think I said something like that) seem to give more As and Bs than when they used the traditional grading system because their students write better and they write more.

You can see the rant coming. I was slipping into my I-don’t-care-what-anybody-else-thinks-because-I’m-right mode.

The logic is that in order to defend this high proportion of As and Bs, the teacher  needs evidence to justify the inordinate supply of As and Bs (this could lead to an interesting conversation about grades, capitalism, zero-sum logic, and supply and demand).

I think I may have mentioned something about co-dependent grade addiction (another bad rhetorical move–but it is worth noting that when teachers argue that students are over-addicted to grades, the pointing finger curves back toward the self).

The more and better claim: Teachers who have overcome their addictions to grades and create in their classrooms a grade-free zone of trust, appreciation, teacher-student collaboration (Freire), and love of writing will see from their students more and better writing. They will see that their students really want to learn–they want to learn more about writing and they want to like to write again–an attitude toward writing generally left behind somewhere around fifth grade. So the students almost necessarily write more and better. The higher grade distribution follows.

Back to the discussion:

My friend said, have you ever had anyone challenge your grade distributions?

He had me there. No, I had to say (but I’ll bet they’ve thought about it). So my constant complaint about fake writing more or less came back into my face.  In my  weak defense: I have–I think even in this blog–used students’ portfolios to demonstrate to the Natilie Wexler’s (see Personal Writing in the Classroom: A Reply to More Ignorance) of this world that students can write quite well, thank you, that perceptions of “bad writing” may have more to do with bad assignments than with bad writing.

[I’m almost where I imagined I would go ( see Flow)]

Somewhere in the conversation, my friend said he felt as if he wasn’t acting fairly if he didn’t distinguish between the student who clearly worked hard and wrote well and the student who didn’t work as hard and didn’t write quite so well.

I will have to admit–I have often when assigning mostly As in my class thought the same thing. I do make gross distinctions–you can see those gross distinctions in the portfolios, but I don’t make really fine, criterion-centered judgments, much as I have in the past. Here’s what I really think–and I know the lines of logic are blurred:

We should not be socializing our students into reward-dependency: working for the reward. The social reproduction function should be obvious.

I know I’m a romantic, but I simply am unwilling to give up the ideology of looking for the reward in  the action, in the living, in the writing itself, not in the gold star we receive for our performance. I will also add that reward comes from doing something that results in community contribution. I get rewards from knowing I have turned my students on to writing. The money and the grades are highly incidental. I know that we live fuller, richer lives if we focus on living rather than on the gold streets paving Heaven.

==============
I just had my current students read (online) my portfolio instructions–and I asked them whether there are any questions about it. Here’s one of the first replies:

“I have read the instructions and am wondering, is the portfolio more for our sake than for anyone else? At least as far as measuring our own growth, this seems to be a useful tool for self-examination on our parts.

I also think that any department heads or administrators would love to read the type of writing done in this class, although they might find trouble putting specific “grades” to it, because of its subjective nature – is that correct?”

She has it right.