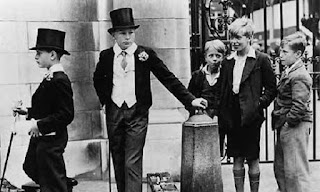 I’m going to do some kind of presentation next week–or posing questions–at the WPA conference in Boise about alternative forms of “scholarship.” I would  like to question the notion of scholarship. I’m a little worried about writing what I really think–that scholarship is pseudo-thinking, only a vaguely disguised form of reifying social class privilege. Actually, once I frame the subject this way, it almost seems as if I don’t need to go on. Of course scholarship is a reification of social class privilege,  a way of making certain that the people who are born to a privileged language and more or less objectified way of thinking reserve for their children spaces for that privilege. I could move here to our discipline’s conversation about the place of personal writing in our scholarship and pedagogy–a class/geneder/race infused conversation–one notably taken up by writers like Jane Hindman,  Laura Michciche, Victor Villanueva, and Richard Miller.

The objectified pose is always more privileged than the subjectified–let’s call that the move toward the pseudo scientific and away from the foul bone and rag shop of the heart. Bourdieu has extensively documented the correlations among class, need, and distance from necessity.

In spite of many challenges, “scholarship” is linked to objectivity (I suppose one could track this to the Enlightenment), with a gesture toward the subjective. But we can’t escape that our field, like other fields, are instruments of social reproduction, reaffirming gender, race, and social class relationships through the agency of discourse and cognitive habits.

I don’t expect that it will every happen, but it would be lovely if scholarship were to turn its head on its tail, privileging personal writing over author-evacuated prose (Hindman, 2003–I think she was quoting Villanueva who was quoting Bakhtin). The real truth is that I can entertain notions of alternative forms of scholarship because I have arrived–somewhat surprisingly, I might add–achieved tenure and beyond. So the privilege of writing what you think, rather than what you think you need to write in order to be published, might in itself be a reification of social class privilege.

There might be some irony here: when you write in your voice, which is closer to what you think than what you think you should think, readers are more inclined to listen. I certainly find this to be true in my classroom–when my students write from themselves outward to their classmates rather than to me for a grade. That latter kind of writing, which I have called fake writing, is genuinely boring to read.

I doubt that in our field we’ll every validate alternative forms of “scholarship,” let’s call it free-form publication–by which I imagine a non-peer-reviewed venue in which one  writes for the pleasure of writing–the kind of writing I like to sponsor in my classes. If others hear the writer (as verified, for example, by the number of hits on a blog), well, that could be scholarship.

Now that I write this, I think it’s pretty lean thinking. But it’s what I’m thinking.  I’m kind of hoping  I’ll get a few hits.